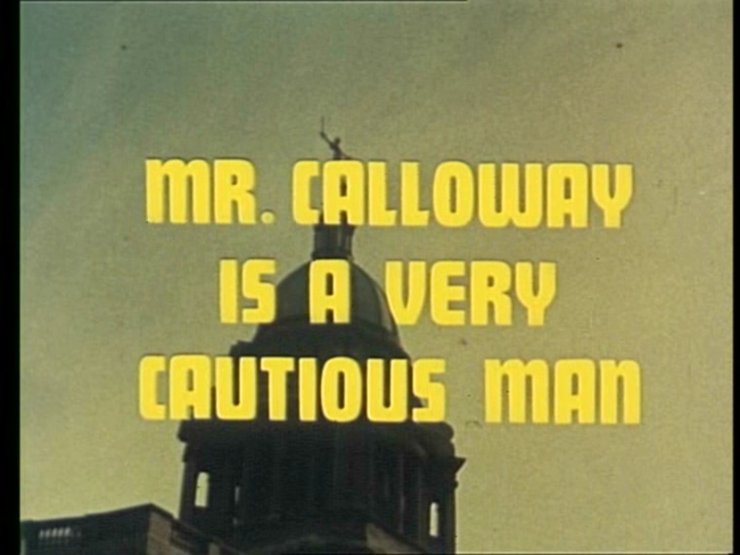 “Mr Bradley, one thing you’ve got to know; Mr Calloway-“ 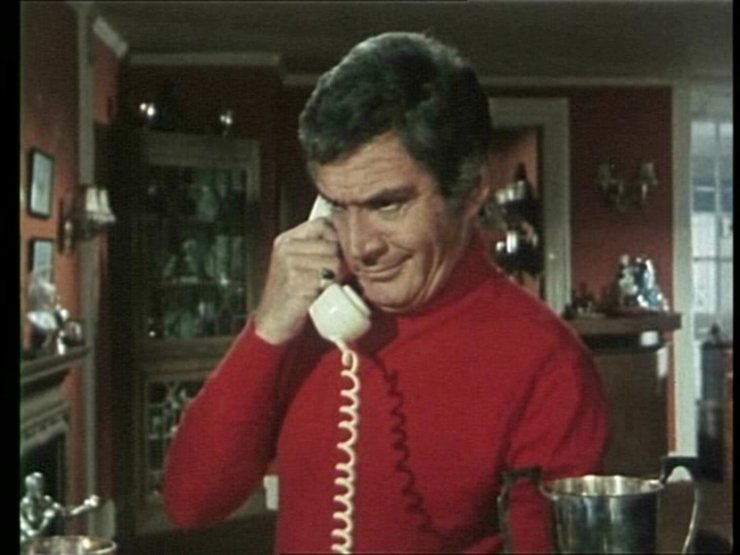 For reasons I may never understand he’s imported a load of guns illegally, and then used his mighty Dick Van Dyke impression to report himself to the authorities who promptly arrested him. So far, so screwy.

After a trial he’s let out on bail and contacted by a Mr Stepford, who works for the Cautious Mr Calloway, who arms some rebels in Africa and who wants to go into business with Evil Gunrunner Gene. The law has been after Calloway for years but hasn’t managed to catch him, so Gene’s finally taken it upon himself to do something about it.

But! It turns out that in fact Mr Calloway has been dead since 1956, and that the firm of Stopford Graham & Stopford (who drew up Calloway’s will and paid off his daughter with a few thousand pounds) are the ones posing as Calloway in order to inherit the rest of his empire and thus, um…er….

Something. Involving a lot of money, methinks.

Starring – ‘Gene Barry and Barry Morse as Mr Parminter’, who again is watching Gene’s ‘copter –  and y’know, it’s really depressing to see that shot of the helicopter rotors when you know there should be one or two more names there…

Locations – There’s a few clips of stock footage London to be had here, and some location work involving cars, but nothing very exciting…

Mission Briefing – No mission, although Gene infodumps on Parminter about halfway through the episode, which makes a change from doing it 30 seconds before the end credits roll as has been the case lately… 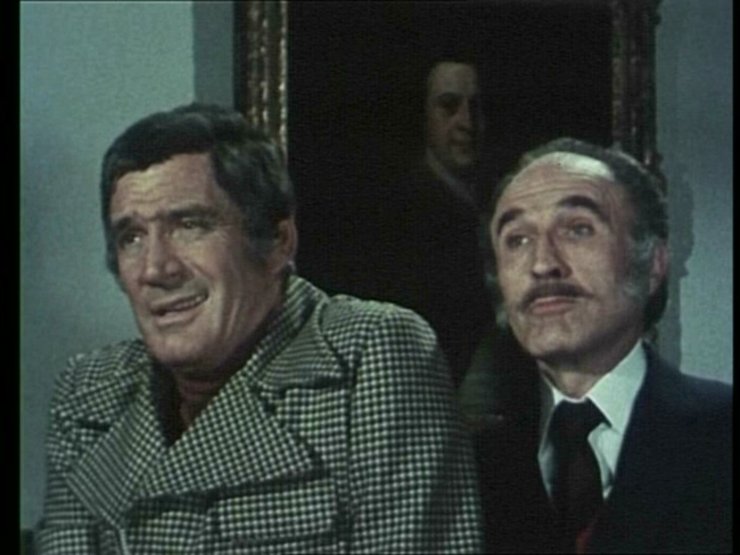 The Bradley Way – It must be a bugger to be the President of the Gene Bradley fan club, no? What with the man himself constantly up to all sorts of international intrigues, and even being put on trial in this episode…although interestingly they’ve not really played up the whole movie star angle lately, instead concentrating (as is the case here) on him being a phenomenal businessman in addition to being the finest living example of humanity.

Anyway, it turns out that Gene set himself up in order to lure Calloway into contacting him, which he did, and they met and made a deal and all was going very well. After Calloway’s thugs take Gene home (right to his door, there’s service) Gene repays their generosity by strangling one of them in the hope that he’ll be able to drive him back to Calloway’s secret hideout. That doesn’t work, and thus his carefully-laid plan is suddenly down the crapper. I guess it’s because now that he’s met Calloway, he thinks that…um…no, it doesn’t make sense, does it?

Anyway…being put on trial for gunrunning has got to damage his business dealings and movie career, surely? Remarkably he’s let out on bail (presumably the jury was made up of screaming groupie girls like the ones seen in the very early episodes) but that doesn’t excuse the fact that he was operating about as outside the law as it’s possible to get. Whenever the Saint did that he would at least let the police know beforehand what he was planning if it were something big, and if it wasn’t something big he’d still manage to keep himself mostly in the clear. Here Gene illegally imports a crate full of guns without a licence, wastes the time of the police and the courts for no real reason, and he’s let off.

Hanging’s too good for him, I tell you.

Mr Parminter is a Very Cautious Man – Parminter is most distressed to learn that his pal Gene Bradley has taken up gun-running, and allows a little of that grief to creep onto his face when their eyes meet just after Gene’s trial.

Is their romance doomed?

Anyway Parminter has Gene followed, by Parminter, and is eventually let in on the plan. Gene explains that he couldn’t have told him about it right away because he’s been hired by the President of the African nation in which dwell the aforementioned rebels, and also because “I was sick and tired about hearing your excuses about why you hadn’t caught up with Calloway all these years!”

Um…the man is dead, yes? He has a grave and everything. That could be the reason nobody caught up with him.

“What About Diane?” – I really really miss Diane. In fact, I miss her so much that I wrote a song about my feelings for her, and got Stuart ‘Too Tall’ Damon to sing it for me. He’s a good bloke, ‘e is.

It was on Youtube, but Youtube took it down, so…you can’t see it. But imagine it. It was good.

“And Gavin?” – I like him too, but not enough to write another song.

The Oldest Swinger in Town – Gene is very nearly successful in beating off two thugs after starting a fight with them for no real reason, but there’s no new moves on show here.

“Alright, old friend – let me see you!” – Gene is expertly defended in his court case by a Miss Ingrid Shore, who may or may not be an old friend. She follows him to his secret dodgy meeting with Stopford, which of course is perfectly not a conflict of interest in the slightest. She decides to leave the room before things can get too despicable.

“Go ahead and make your deal. If you get caught, I’ll defend you, that’s my job.”

What? I don’t know much about the law and stuff, but…wouldn’t that mean she’d have to be a witness in her own case? If she knows that Gene is doing something dodgy she can’t defend him, can she?

One thing she can do is arrive without explanation (and with the police) at the end of the episode to do…well, bugger all as far as I could make out…

“Shall we take them?” – Stopford invites Gene along to his office to hear ‘Calloway’s’ offer, but that’s about all he does. He, his mute associate Graham, and another man (played by Freddie Jones) who is only ever named as Calloway, have been pretending to be Mr Calloway all over the world for the last however many years in order to keep making money from the vast empire that was already set up. Given that they all look utterly different from each other and that Calloway’s business partners might already know what he looked like, and that Calloway is dead anyway, their plan is clearly foolproof.

‘Calloway’ also has three thugs – two of whom are named Russell and Soames and the third is a hotel porter – working for him, and the two with names somewhat sneakily do something sneaky to Gene’s car while he and Parminter are at the cemetery looking for Calloway’s grave. All we ever see is one of them hiding behind the car with a razor, which is proof enough for me of sneakiness afoot.

They tail Gene and Parminter until the Adventurermobile crashes into a tree, then drive past having seen that the two men they just tried to kill are perfectly fine. So, um…mission accomplished, right?

Fret not – everyone naughty is arrested at the end of the episode, so you can sleep easy tonight. 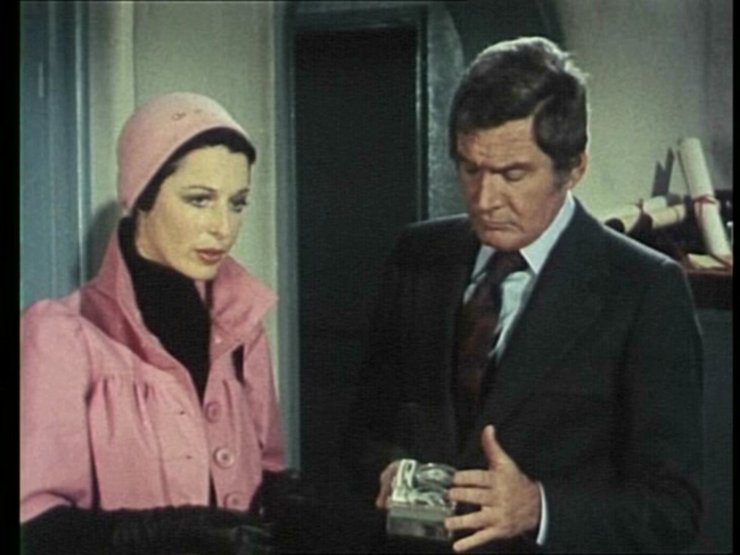 PARMINTER (on Calloway): “He’s kept more wars going than any man alive! We’ve tried to catch up with him for years!”

Permit me to stuff this pillow over my face while I scream incoherently for a few moments.

Gene explains the reason for his actions:

GENE: “The rebels in his country have been receiving supplies. I met him a couple of years ago, remember?”

“You came into my office one morning, and said “I just met President Yboto!” And I said “Did you?” and you said “Yes.” And there we have our sweet sweet continuity.”

It’s all falling apart for Stopford Graham & Stopford, and their poor secretary:

Yes, and it wasn’t funny the first time. Or the second time. Or the third, or the fourth, and certainly not the fifth…

Cracking Cliffhangers – Mr Chief Inspector Tribe reads out the list of charges for which Gene is finally being taken into custody; “misrepresenting a customs declaration, unlicenced possession of a weapon, or weapons, and illegally attempting to export the said weapons….Mr Bradley, I think you’d better get your coat.”

To which Gene replies “Don’t you like this one?”

Ba-dum-boom-tish. Actually, for this series, that’s a reasonably good opening…

The Irony of It All – “I do not create conditions that make for terrorism!” 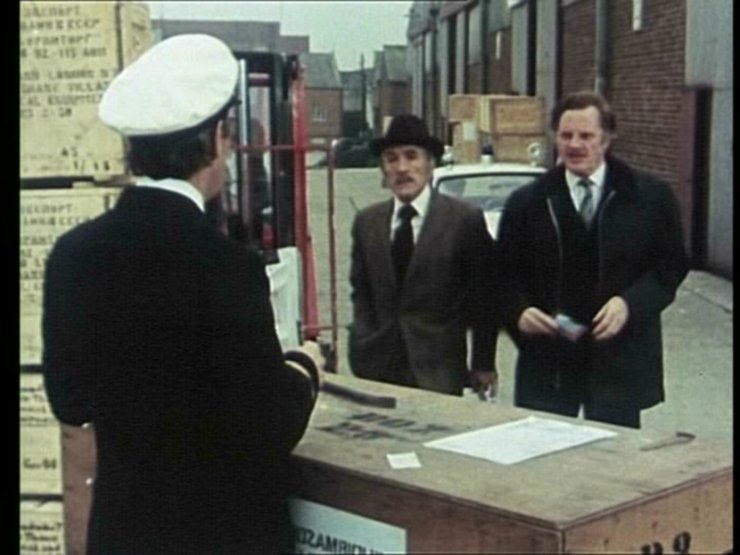 “What’s it all about, Gene?” – Would Parminter really go along to the docks and demand a package for Gene be opened just because somebody who wouldn’t give his name phoned him up and told him “you’d be surprised what’s inside it”? He seems more like the sort of chap who would then phone up Gene and go “I say, Gene, I just had the strangest conversation on the telephone…” and actually ask Gene what was going on. 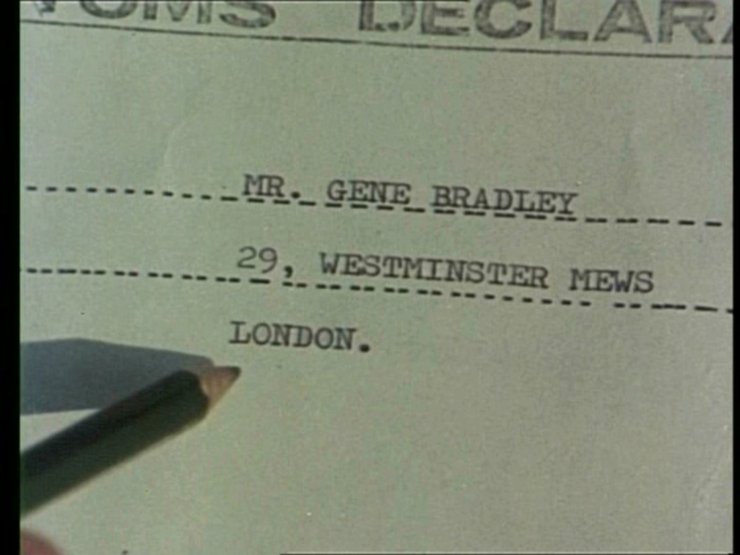 The package Gene has sent to the docks gives his address as 29 Westminster Mews, despite him living at number 20 back in episode 19. This may not be a continuity error as such, though…perhaps he owns the entire street, and all the interiors are linked together in one big long mansion, thereby explaining all those wonderful inconsistencies in his home that have been driving me crazy.

Except for that time a woman walked through a solid brick wall, of course.

My theory is further confirmed by the number 20 on his front door. 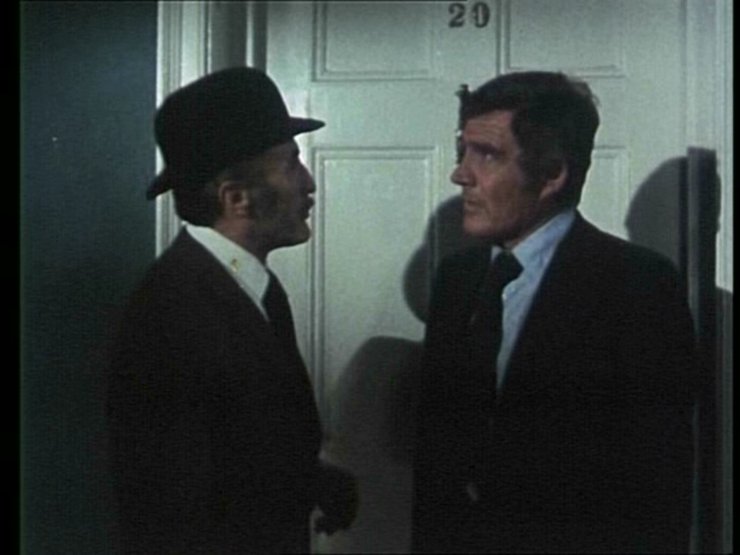 “It’s all rather difficult.” – As you can see from the piccy up top the footage seen behind the episode title and credits makes it look like London has just been plunged into a nuclear winter.

Also, given the terrible murkiness of the DVD it’s difficult to make out, but as Gene discovers his car’s brakes are gone the shots of the speeding countryside as seen through the windshield show that the car bonnet is red, when the car itself is silver.

And there’s also some spectacularly dodgy back-projection during the chase, but that’s to be expected, natch.

The Defining Moment – comes right at the start of this episode, as we join Gene practicing his Dick Van Dyke impression, and looking for all the world like he’s finally lost it and is sitting around his house talking to himself.

Our hero, ladies and gentlemen. What an utter loon.

A runner-up would be Gene’s car crash, which involves him just missing a tractor, then swerving off screen. After a shot of Gene and Parmy bracing for impact we cut to a shot of a lone hubcap landing on the road (!), then back to Gene and Parmy sitting in the smashed-up car, uninjured.

After it collided with a stationary tree while doing at least 50 mph.

Still, could have been worse. If ITC had had stock footage of that make of car falling off a cliff, then brother, it would have fallen off a cliff…

Ramblings – I don’t got much more to add, but isn’t it amazing to think we’re just two episodes away from the end of the series now? Gosh.

Rating – 2/5. I just got done watching it and all I can remember about it is that it wasn’t very good.

Still, I’m sure all this is building to an absolutely cracking finale.