WARNING – This article contains pictures of Gene Barry wearing lots of not very much at all. Repeated viewings of such images can result in headaches, nausea, dizziness and profuse sweating. 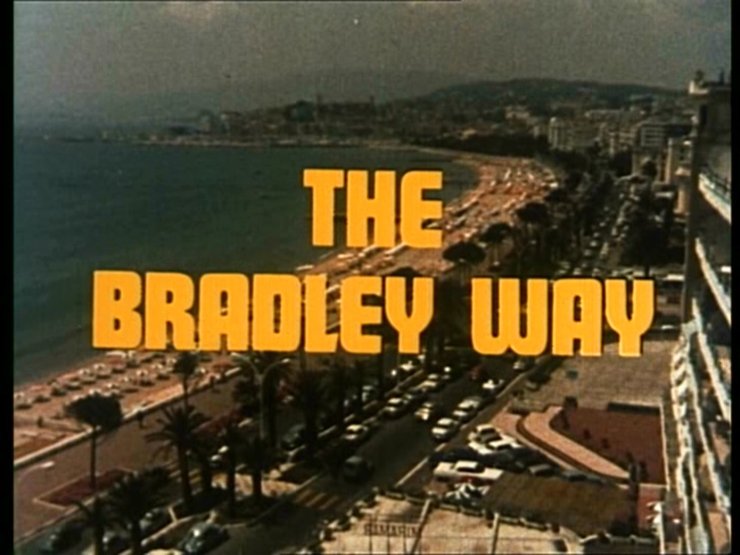 “We need evidence, but we don’t have time…so we’re going to do it the way I’ve seen it done in a couple of movies…” 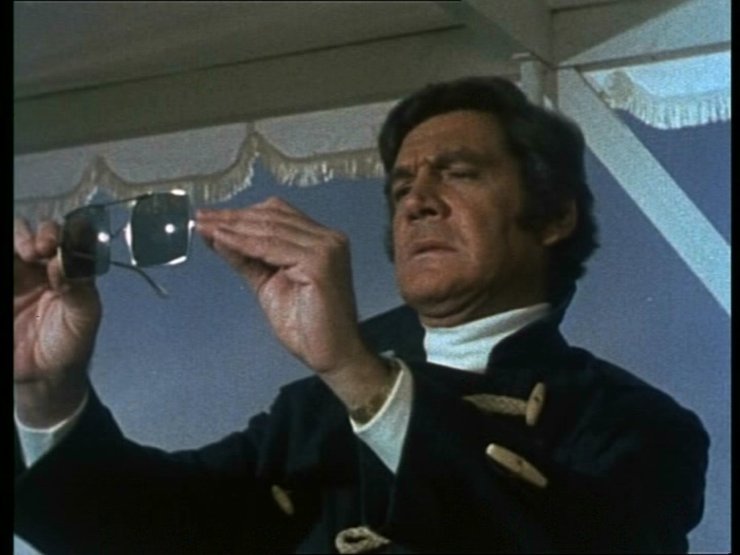 Plot – The Master has come up with his most fiendish plan yet to rid himself of that meddling Doctor. Allying himself with Colonel von Strohm from ‘Allo ‘Allo he poses as a doctor himself and interrogates a former NATO commander in the hope that he will be able to control the entiiiiire Universe!

Gene Bradley also has a problem. His clothes just won’t stay on…

Starring – ‘Gene Barry with Catherine Schell and Barry Morse as Mr Parminter’. And guess what Parminter is doing? If you said anything other than “Watching Gene’s helicopter take off”, you’d have been dead wrong. You suck.

Locations – We’re back in Cannes this week, although we don’t see much aside from the docks until later in the episode when a rather nice chase scene suddenly takes us all over the place.

Er…well, if you say so. G’morning, Gene. Gene’s having a nice steambath while Parminter chats to him, which is our first glimpse of that magnificent hairy chest of his. Oh dear. And don’t think we’re out of the woods yet, cos we ain’t. Not by a long way…

“General Schlessen. Now retired because of illness, being held incommunicado aboard yacht now anchored in Cannes harbour, being attended to by a Dr Josef Kerston, a physician specialist, from the East.” Ooh er. While Gene explains this to us we get a shot of the yacht, and of Schlessen in bed being attended to by Kerston (aka The Master) doing doctorish things.

“He’s also got a nurse there.” adds Parminter. “Gerda Hoffman. Do you know what I think?”

Of course he does. This is Gene Bradley, after all. He knows everything and everyone. “Yes.” replies Gene, unsurprisingly. “If Schlessen talks, he blows the whole NATO setup. Right now they’re all on board Werner von Beck’s yacht.” Werner von Beck being, of course, Colonel von Strohm, though sadly Sam Kelly is nowhere to be found. “That’s exactly why you want me to stick my neck into this – Virginia Douglas.” For a moment, it does sound as if he’s actually offering to stick his own neck into Virginia, which…yes, would be painful for all concerned.

Suddenly Gene is in the shower and Parminter is right there, still chatting to him. 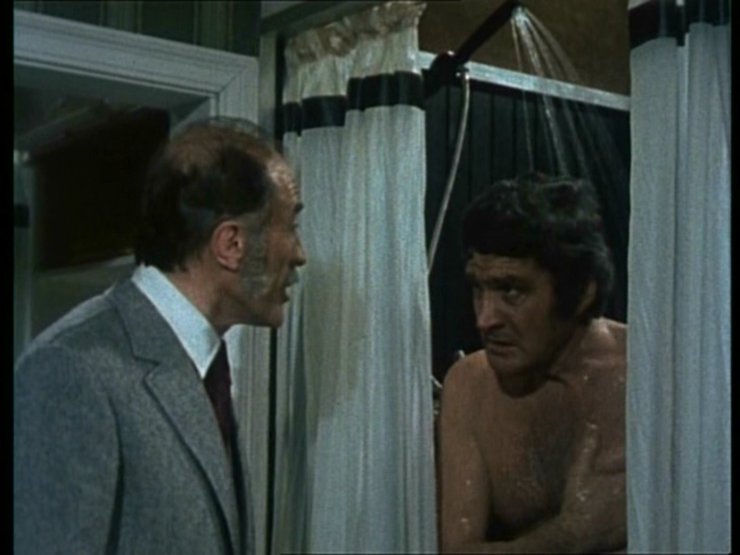 Good lord, can’t they ever have a conversation by telephone? Why does Parminter always have to be right there while Gene is washing himself? It isn’t healthy. For him or for us. Presumably he has no pants on right there? Gene that is, not Parminter. Though it’s equal odds really.

“Listen Gene, we’ve tried every other way,” wails Parminter, “But with Gerda Hoffman on board there it’d be easier to get a man into Fort Knox.” Um…what? She’s just a nurse…OR IS SHE???

Yes. She is. So what’s the problem, exactly? What terrible power does this one nurse hold? I don’t see it…

Anyway, Gene finishes his shower and Parminter hands him a towel, and I’d rather not see the ins and outs of Gene’s daily grooming ritual thank you very much. Parminter’s still babbling on all the different things they’ve tried in order to rescue Schlessen, though he doesn’t go into details so as far as I know all they might have done is to write a polite letter asking if they could have their former NATO commander back. Anyway, Gene stops him and says “Now, briefly and succinctly, what are you trying to tell me?”

The Bradley Way – Gene’s last minute plan to save Schlessen involves first getting Von Beck to think that The Master and Virginia – two innocents in all this – are having some sort of affair behind his back. Once the wheels are in motion Gene quotes from Othello like the dunce he is.

Von Beck then fires The Master after he finds Diane with some of Virginia’s clothes…yes, that makes no sense to me either. However, there’s still the problem of the mysterious Gerda Hoffman to contend with, as she sets up a plan to ambush the ambulance that will transport Schlessen to a nearby hospital where he will continue receiving medical attention. The rest of Gene’s plan is explained in the ‘Defining Moment’ section…

Mr Parminter is a Very Cautious Man – Parminter’s there at the start to sweat and whine and hand Gene a towel. Then he buggers off again.

“What About Diane?” – Diane is in Cannes posing as Gene’s nurse, presumably to help him with his sudden inability to keep his clothes on.

She says that she took a first aid course when she was in in the girl scouts, but other than that she knows nowt about medicine. Not to worry though, as Gene gives her three hours to read up on how to be a nurse before sending her over to the yacht. He’s good like that.

Gene has her sneak a listening device into Schlessen’s room, ‘hidden’ in a bunch of flowers. Well, placed on one of the flowers. He’s not very good at this whole spying lark, is he?

“And Gavin?” – No Gavin in this episode, but there is a grey-haired chappy by the name of Brett hanging around, apparently another of Parminter’s agents. He can drives boats and ambulances, follow people and get beaten up – although his injuries heal remarkably quickly. As he’s a one-episode character I was surprised that he survived being knocked out and getting chucked into the sea, which makes me think that Brett was originally meant to be Gavin and for some reason just isn’t…

The Oldest Swinger in Town – Gene arrives in Cannes wearing his trusty duffelcoat, and also he’s picked up a new pair of sunglasses to replace the ones that sacrificed themselves for him in the last episode.

Gene later goes water-skiing – and of course he’s an expert at it, and everyone watching him comments on how good he is at it. And again he’s all naked, except for his bright yellow shorts, which leave absolutely nothing to the imagination because it’s all right there on screen in horrid vivid yellow detail. 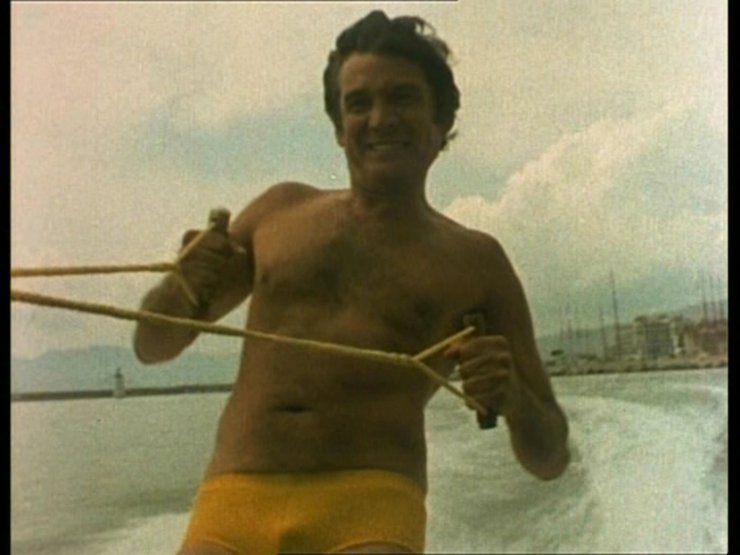 Look! Look at that! I could very easily have gone the rest of my life without seeing that!!! I can trust that his BALLS are in there AND THEY’RE ALL SOGGY BUT I DON’T NEED TO SEE THEM ON-SCREEN!!!!

And there’s his bum, another region of his body I didn’t need to see outlined in his shorts…they mock me! His butt cheeks mock me!!! They do!!!

Gene dances in this episode as well. As if he hadn’t already made enough of a spectacle of himself. Again he’s all arms and bum, and I would give more detail except it’s his bum and I don’t want to…

“Alright, old friend – let me see you!” – Virginia Douglas is an actress/former co-star and no doubt lady friend of Gene’s given half a chance. She’s there to be manipulated and used by him, and still come out of it all smiles and kisses. Aww.

“Shall we take them?” – I don’t really know where to begin with this. Von Beck, The Master and Hoffman all seem fairly suspicious throughout, but about 7 minutes in we see Hoffman meet up with some other guy named Borislav (not named as such on screen – as with a lot of Adventurer episodes working out the characters’ name is a process of elimination using the end credits and the DVD booklet), and she plays back recordings of Schlessen’s interrogations. Then she pretty much says “If he dies, then he won’t be able to answer any more questions.” before storming off. And in other news, the sky is blue and rain is wet, but you don’t see me getting so huffy over it…

Gene later explains that The Master is in fact being pressured into working for Hoffman because “they’re turning the screws on his family behind the Iron Curtain.” Crumbs. He also says that von Beck isn’t involved at all, so…yeah. I don’t understand why this important ex-NATO person is being treated on a yacht in Cannes. I just don’t.

PARMINTER – “Honestly, Gene – it’s so hot in here I can hardly speak.”

GENE – “Yeah, because of my attacks.”

VIRGINIA – “Attacks of what?”

Oh Gene, you…you’ve got a nerve…

VIRGINIA – “Well, I’ll make a confession – I could have got it right first time.”

And what the heck, I’ll make a confession too – I want this scene to end. Please?

Cracking Cliffhangers – The aforementioned “Gene…I need your help.”. However, it somewhat loses what little impact it has when you remember that it’s coming from Mr Parminter, the sort of man who’d ask Gene for help when he can’t remember where he’s put his car keys. Gene, of course, is the sort of man who would then search for those keys by putting on a silly disguise and renting out a pedalo to search the Thames only to discover Parminter had eaten them and just forgotten about it.

The Irony of It All – “It’ll never replace James Bond.” 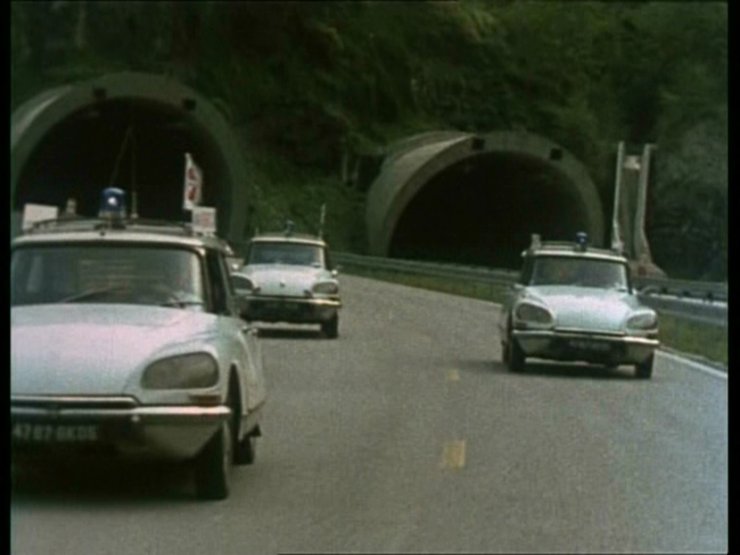 “What’s it all about, Gene?” – I’ll say it again – why is Schlessen being looked after on a yacht? Why not, say…a hospital? Fair dos, he gets taken to one at the end of the episode, but still…

In the final scene, as Gene and Virginia say goodbye (without knowing exactly how much damage Gene has caused to her marriage) a man (presumably taking Gene back to shore, although it’s not certain) walks past them carrying what I guess is Gene’s suitcase. The only problem is that Gene never arrived with a suitcase (although he did mention being installed in a hotel before Virginia offers him a space on the yacht), so for a moment it just looks like some random guy is stealing things from right under their noses…

“It’s all rather difficult.” – The nighttime scenes in this episode are extremely dark – too dark to make out anything that’s happening. I can see…people wandering around…someone spying on someone…cars driving about..and a fight scene. But what significance that has to the story is beyond me because it’s too dark to make anything out…

The Defining Moment – The baddies follow Schlessen’s ambulance as it leaves the harbor heading for the hospital. Gene has however anticipated this, and he and Diane join the chase in identical ambulances. We are treated to the insane sight of three ambulances, all weaving in and out of each other, as the baddies try desperately to keep track of which one holds Schlessen. It’s utter madness, and to make it worse they all have the goofiest-sounding horns ever invented…

The cover of the book Gene gives Diane – 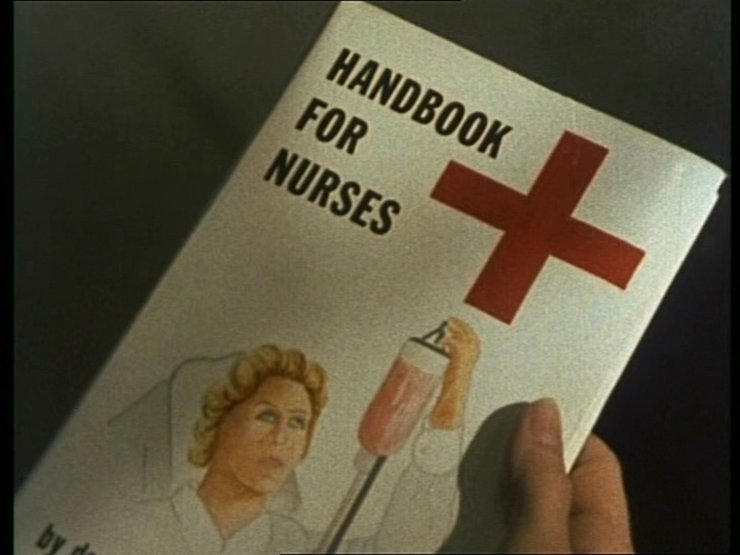 That’s one hella scary nurse. I hope she gets herself seen to before accepting patients…

Rating – 2/5. This is the last of what you might call the ‘old school’ type of Adventurer stories, the ‘important person in need of rescue from unnamed foreigners’ kind, and by this point the format’s getting a little old. It wasn’t exactly fresh to start with, but fortunately change was just around the corner – not necessarily for the better in most respects, but certainly the types of stories being told were about to become more varied.

Anyway, this episode…is OK. Nothing great, it just…is. I can’t get that excited about it, not even with Anthony Ainley on hand to ham things up – he just stands around looking bored, as well he might. In fact, after seeing Gene…y’know, all naked and hairy and dripping…I don’t think I’ll be able to get excited about anything for a long long time…