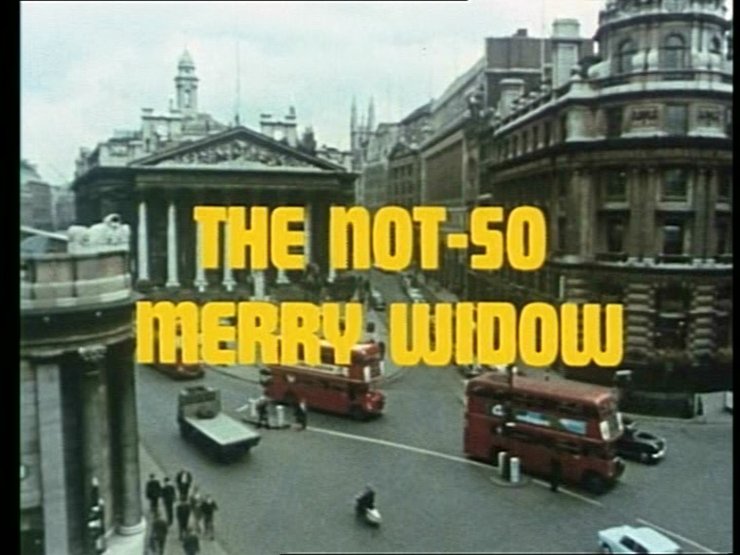 “You can’t exactly have a murder without a body, can you?” 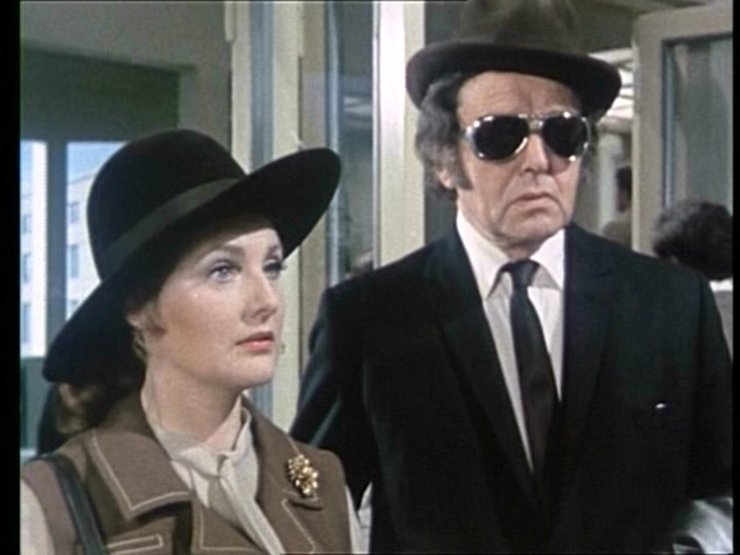 Plot – The media is awash with speculation regarding Gene’s torrid affair with Lady Diane Battersley, wife of Sir Walter, after a magazine article tells all. This comes as something of a surprise to our hero given that he’s never actually met this woman before. Showing up on his doorstep she explains that she only came up with that article to get her husband’s attention again, but neither Gene nor Brandon are convinced.

Sir Walter then phones Gene up, inviting him over to ‘is stately ‘ome for a chat, but on arriving Gene finds nothing and no-one – except a suitcase, and a nasty bump to his head. Next morning the papers carry the news that Sir Walter is missing, and the police soon arrive on Geney’s doorstep convinced he’s the murderer…

Even though they don’t yet have the body. But they will soon. Honest, guv.

Starring – ‘Gene Barry and Barry Morse as Mr Parminter.’, who strides confidently through the London streets, refusing to lower his brolly even though it’s not actually raining. There’s that firm British resolve for you.

And do you remember in an earlier episode when I noticed one of the extras (not episode 2‘s Mr Concerned) and said “He’ll be in a later episode.”? Well, this is that episode. He’s one of the reporters…now if only I could remember episode I first noticed him in…

Writer – Marty Roth – there’s a name we’ve not seen for a while. Would this have been written before he stepped down from his position as story consultant?

Locations – This week’s little tale is mostly set in London, with a quick stock footage trip to Geneva. Minimal location work, although there is a scene with Gene and Parminter on a bench near the Thames.

Mission Briefing – No mission, no briefing, no disco, no fooling around. 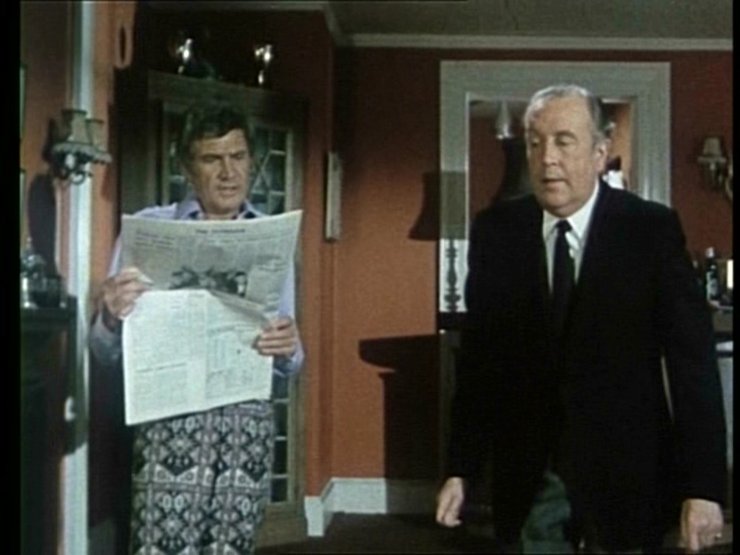 The Bradley Way – Gene’s investigations lead him to the photographic studio of one Vanessa Battersley, niece of the missing Sir Battersley. He breaks in and has a little rummage around, as he is prone to doing. She explains that her uncle was deep in debt and was often borrowing her money, which explains the ultimate thinking behind the fiendish plan; she, her aunt and (not dead) uncle, and his business partner, have all gotten together and decided to fake Battersley’s death setting Gene up to take the blame. It’s all rather clever, but of course Gene is clevererererer. On the way back from a trip to Geneva (where they find out that Battersley was in hospital for ten weeks – getting plastic surgery apparently, though we’re only told that much much later) Gene decides to force a confession from Vanessa by forcing 88-Delta into a nosedive. Except that this week the little plane is called Delta-88.

Apparently Gene also owns a few boats, and a hairy fellow named Jenkins comes by every week to give him a massage. He’s got it all going on, don’t he?

Mr Parminter is a Very Cautious Man – Parminter’s back to only making a handful of appearances to justify Barry Morse’s billing on the opening titles. Gene meets him in his office to share his concerns about Lady Battersley, then they meet on a park bench to discuss the same thing, then ol Parmy shows up at the very end to sip champagne and to have the plot explained to him. Like the Doctor’s companions, Parminter is our way into this weird and wonderful world that Gene inhabits.

“What About Diane?” – She’s gone, that’s what. Unless you mean Lady Diane, of course…

“And Gavin?” – No Gavin, so I’ll fill out this section in celebration of the return of – yay! – Dennis Price as Brandon. Barely conscious Brandon gets the first scene of the episode, opening the front door to a throng of journalists. After bluffing his way through some guff about Gene being away touring Antarctica Brandon then gently shoves them out of the doorway – rather wonderfully pressing two fingers to the forehead of one of them.

Aside from his general butler duties his main role here is to eavesdrop on Gene’s conversation with Lady Diane, so that Gene can later consult him and get the opinion of his faithful manservant. He also gets the end-of-episode comedy moment, as Parminter suddenly believes that Brandon’s listening in on their cosy little chat. Sure enough, he is, but Gene isn’t that bothered. “He doesn’t like being left out.” he explains, as if talking about a little puppy. “Do you, Brandon?” In response Brandon just holds up a glass, and receives his hourly dose of champagne. Well earned, too, I feel.

The Oldest Swinger in Town – No dancing and no fighting…but a veritable smorgasbord of dodgy fashions.

And while we’re on the subject…

“Alright, old friend – let me see you!” – No old friends come out of the woodwork to see Gene this week. Except us, obviously.

“Shall we take them?” – Everyone in this episode is up to no good (with the exception of the main cast and the police inspector). They’ve all run out of money somehow, so they decide that by faking Sir Walter’s death they can get hold of his insurance money and, presumably, invest it wisely in whatever it was that people spent their money on the 1970s.

GENE: “I suppose you wonder what’s going on?

One doesn’t know how to use pronouns. The other lacks the correct knowledge of tenses. Together, they spell WACKY!

Cracking Cliffhangers – Having protested that he’s never even met Lady Diane Gene struggles in vain to produce some sort of facial expression when she promptly walks in. Upon failing he looks to Brandon for support, who just coughs knowingly and asks “Will that be all, sir?”

The Irony of It All – “I don’t know this woman, I’ve never even met her.” says Gene, about Lady Diane Battersley.

Now, if we just take her name – Diane – then of course that’s the same name as Catherine Schell’s character, whom you will recall left the series after a row with Gene during filming of the previous episode. Soooo…when Gene denies knowing ‘Diane’, he’s really denying knowing Catherine Schell. Huh? Huh? Isn’t that ironic? Huh?

Too much of a reach? Yes, probably… 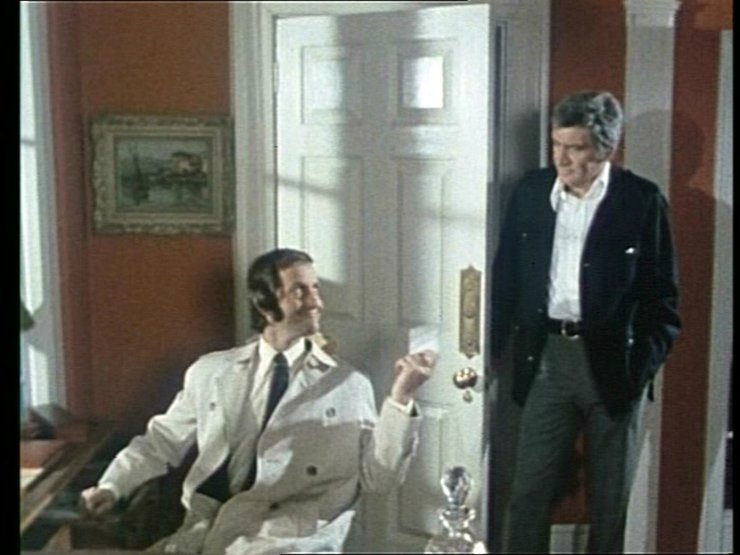 “What’s it all about, Gene?” – Having been impressed by last week’s episode giving us a definite date, this episode then gives us a newspaper dated Thursday October 12th – that’s over two weeks before the events of the previous episode.

Oh, and the newspaper seems to have misspelled ‘Battersley’. And would any newspaper, even the The Guardian, really use the phrase ‘house a shambles’? I do like the ‘police suspect foul play’ bit, as if ransacked homes with their owners missing is a completely unsuspicious thing…

“It’s all rather difficult.” – 88 Delta’s nosedive is conveyed by tilting mucky old stock footage of the jet at a 45 degree angle, intercut with whatever it is that a camera that films when you stick it in an aircraft window and wobble it around a lot.

It’s also made very obvious that the entire production only had one prop phone.

This episode very definitely establishes that Gene’s house has an upstairs and a downstairs, and that the lounge is upstairs, but I’m certain that the early episodes had it at ground level. However I’m going to stop worrying about it now because it’s clear Gene’s little home is somehow alive, gleefully rearranging its own interior from scene to scene, or even from shot to shot……either that, or Lady Diane is a ghost.

The Defining Moment – Just before leaving the Battersley’s home Gene gets a blow to the noggin, not reacting to it until a good second after it’s happened. He drops to his knees…and then, very slowly, rolls over and goes to sleep. Aww.

Ramblings – Last night, I had a dream.

I came home, and was told “If that man who lives next door comes round, don’t let him in.”

Why not, I asked.

“Because we’ve just found out he’s killed two people and he’s buried the bodies in his garden. We’re off to tell the police – you stay here and don’t let him in.”

So anyway, I’m just sitting there, when the doorbell goes. Uh oh – it’s the guy who lives next door. What’s his name again…Gene Barry, isn’t it?

Gene Barry picks up a rock and smashes the window with it. Not completely, just a hole big enough for him to climb in through.

“I didn’t kill those people!” he cries.

OK, Gene, OK…ah. He’s pulled a gun. “I didn’t!” he screams again – before turning the gun on himself and firing. Without thinking I move forward and catch him as he falls, holding Gene Barry as he dies…

Scout’s honour, even though I never was one, that’s the dream in its entirety. I like to think that this is some sort of message from my subconscious, ‘killing’ Gene for me out of mercy so that I don’t have to face these godawful final six episodes. Of course, there’s always the alternative explanation – that my subconscious fancies Gene, and was looking for any way for him to end up my arms.

You may now have me committed.

Rating – 3/5. Annoyingly, the plot to this one actually makes sense…but we’re kept from knowing that until the last possible moment. Gene works it all out about ten minutes before the end of the episode and then spends the time walking around in a self-satisfied funk which gets really irritating. Characters say things to each other in a knowing way, but it all means nothing when we don’t know. Ah…this one honestly isn’t so bad, but…yeah. OK, it can have three stars – but only because I can’t give it two and a half.