“Until those signed agreements are in our possession, Miss Suzy Dolman is the most important person in the world.”

Plot – Suzy Dolman has somehow inherited $200 million and a major oil business, in which she now has the 51% controlling interest. Rather than spend her days running the company she’s decided to live like a hippy in Provence and sell the company to “one of the island countries. A red one”. Ooh deary deary me. Of course she’s perfectly within her rights to do this, it’s her company and her life, but that ever-charitable old git Gene Bradley takes it upon himself to change her mind.

Locations – We’re in Provence, allegedly, but we don’t get to see much beyond lots and lots of motorways and the arena. More on that later…

Mission Briefing – Wow. This episode, we get a mission briefing that doesn’t seem to have been edited together by Salvador Dali. Gene and Parminter meet at Gene’s house, and while they talk we get random – but not too distracting – shots of Suzy and the nameless baddy of the episode.

The Bradley Way – At the start of this episode Gene is involved in some sort of motor grand prix. Is there no end to his talents? The answer is of course no. He’s the greatest man who’s ever lived. And needless to say he’s winning.

This episode features the first time we see inside Gene’s little house. On display are about fifty thousand trophies that he’s no doubt won for being the greatest person ever to grace the Earth with his presence.

Gene picks up Suzy hitchhiking. For a change, she recognizes him but couldn’t care less who he is. Later, she says “I’m not one of your fans.” Bravo! Finally a character with a modicum of sense…at least, at first. Later he’s her bestest and snoggiest friend ever. Awww…still, it was nice while it lasted…

The motorway cafe that the pair visit is a very drab place. The walls are bare stone, and there’s only one decoration on them…a poster of Gene, which he cheerfully signs for the cafe owner. What are the odds? It seems to be for a film entitled La Vallee du Tonnerre, which the Altavista babel fish confidently tells me means The Valley of the Thunder. Or maybe Thunder Valley. Either way, it’s conjuring up the image of Gene Barry as an undercover International Rescue agent – and knowing his infinite talents, he probably is already. Once he’s got it signed the cafe owner takes the poster behind the counter rather than stick it back on the wall where it was. Odd. He seems to be under the impression that it’s now valuable somehow. Or maybe he planned to eat it. Alas, we shall never know for sure.

Gene places a listening device in the Consul’s office. He does this by ‘casually’ wandering over to a table, taking the device out of his pocket and fiddling around with it in a clumsy fashion until it’s in just the right position. Smooth, Gene. Real smooth.

Mr Parminter is a Very Cautious Man – Parminter calls Gene away from the racetrack, to tell him…um…well, that it’s time for the episode to start, basically. Other than that, he doesn’t appear.

“What About Diane?” – “She’s already on stakeout.”

Diane is assigned to watch Suzy until Gene arrives in Provence, but this is truly some of the lamest spying that I’ve ever seen. Basically, while Suzy wanders around, Diane is following her all over the place in her car. And that’s not keeping-out-of-sight following, it’s crawl-along-just-a-few-feet-behind-her following. Literally. As you can see in the above picture.

She’s also seen later listening in to the goings-on in the Consul’s office courtesy of the bug that Gene so carefully hid.

It’s not Gavin this time round though, as Stuart “How the hell tall are you?” Damon makes his second and final appearance as Vince. Here Vince has a larger role, as Gene makes him dress up as a gendarme and set up a roadblock along the road on which he’s just seen Suzy walk past. He diverts two cars – neither of which he can possibly suspect of containing any baddies, although one of them does – before dismantling the roadblock. Well, that achieved a whole lot of not much. Well done, Vince.

(2015 update; that terribly-clever David Barnes chap got in touch with the following explanation for this apparent lunacy- “He’s doing it to ensure that the only car on the road that the girl can flag down is Gene’s, so that Gene can then take her to a cafe and, um, jump-start his plan to prevent her from doing what she wants with her own company. Yes. Well.
What a load of rubbish.” Quite so.)

Gene leaves Suzy at the motorway cafe and the cunning old bastard steals her purse, thus ensuring that she can’t pay for her lunch. Gendarme Vince steps in and promptly arrests her, taking her back to a basement that Gene has had made to look like a police station. After throwing her into a cell, he then charges her with the heinous crime of…vagrancy. Um…yeah. Whatever.

Vince and Diane later drive trucks to intercept the papers in which Suzy signs away her company. They do this by cramming them full of stuff, which then falls off and spills all over the road the moment they put their brakes on. In this way they able to block the road and trap the courier carrying the papers…

The Oldest Swinger in Town – …thus allowing manly superstud and all-round greatest-guy-ever Gene Bradley to leap out of nowhere and beat up said courier and his driver, while pulling a few silly faces. See below.

Not much in the way of fashion disasters this week. Well, aside from the usual color clashings and whatnot, there aren’t any particularly noteworthy ones, anyway.

“Alright, old friend – let me see you!” – Amazingly, we don’t meet anyone from Gene’s past here, though I suspect that as Gene is the one who devised this mission rather than Parminter he probably knew whoever it was who left Suzy the oil company. In fact I bet that person couldn’t possibly have been so successful without the help of the all-knowing Gene Bradley.

“Shall we take them?” – the unnamed ‘island country’ is represented here by an unnamed ‘Consul’. ‘Xcept he’s that guy from Coronation Street. Either way, he’s fairly useless. But he has a nice office. He also has a few thugs and Zavar, who we’re told is ‘one of their top agents’, but to me just seems to be a camp bald guy…oh, and they have a helicopter, from ‘the fleet’, apparently.

GENE – “Money itself isn’t evil. It’s just that some of the people who have it are.”

Gene Bradley pulls no punches in telling it how it is.

CONSUL – “It is unfortunate you became involved.”

GENE – “You know how it is. When you’re…dealt the cards, you…pick up the hand.”

Ooh. Nice metaphor. For whatever the heck you’re talking about.

Cracking Cliffhangers – Once he’s explained his plans to Parminter, Gene is told that he’d better get a move on if he wants to get Provence in time to interfere in something that’s none of his business. “I left three hours ago, Parminter.” he replies haughtily. “What you heard was just a recording.” Um…yeah. I think he’s basically trying to say “I’m a slow old man, leave me alone.” but that probably didn’t sound so good…

The Irony of It All –

PARMINTER – “The only omission as far as I’m concerned is knowing what’s happening.” 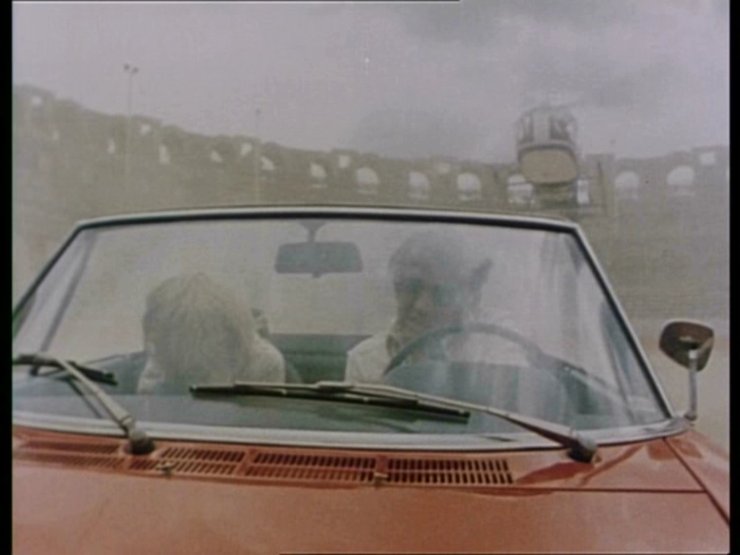 “What’s it all about, Gene?” – The fact that being thrown into a fake cell and then getting lectured by Gene is enough to Suzy change her mind about handing over her company is just silly.

“It’s all rather difficult.” – Oh, this is great. Somebody on a bike passes Suzy’s boyfriend Ben as he crosses the road…and an engine noise has been dubbed onto it. Yes siree, someone in the editing room has mistaken an ordinary pedal bike for a motorbike and dubbed on the wrong sound effect. Vroom.

When Gene gets out of his car at the motorway cafe, he says something. I think it’s dialogue of some kind, but unfortunately the noise of the traffic makes it impossible to hear.

The Defining Moment – Gene carries out a just-in-the-nick-of-time rescue at Arles Arena, saving Suzy from the dastardly villains and their helicopter, with which they were going to ‘take her home’. Knew they were up to no good. What makes this a special moment is that in any other series it would look exciting. Here, it’s boring, there’s no tension at all. Perhaps the best bit is where Gene’s car ‘hurtles’ into the arena entrance, driving straight through a puddle and drenching the camera with muddy water. Nicely done, chaps.

Ramblings – Apparently Arles Arena is open day or night to any old baddies who feel like using it as a helicopter rendezvous point.

In fact the whole arena scene looks very risky. The helicopter is hovering right alongside Gene’s car, and it just looks unnecessarily dangerous. Crumbs, you know things are bad when I’m worrying about Gene’s safety.

Suzy going from a Gene-hater to a Gene-fancier is rather disappointing, but not exactly unexpected. No-one can resist the handsomeness of Gene Bradley…

Rating – 3/5. Well, the fact that this one has an actual plot that makes a sort of sense automatically gains it an extra point. In The Adventurer, a decent plot is not something one takes for granted. It’s not a brilliant episode by any means, but it’s certainly a step in the right direction… 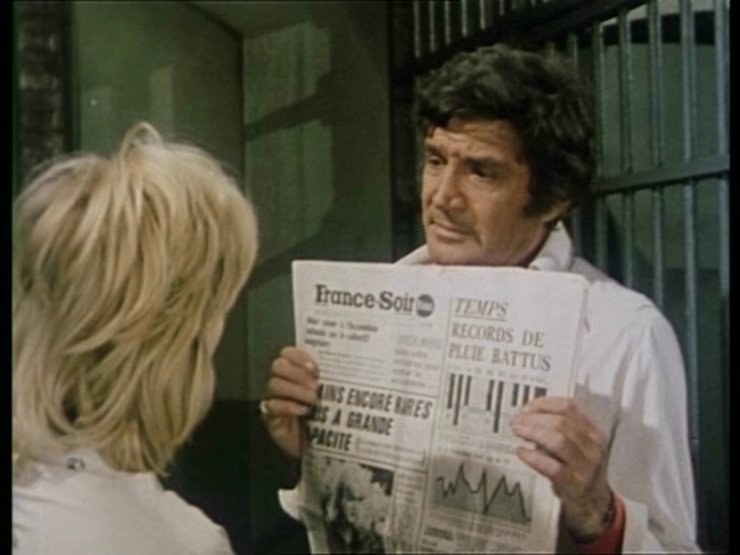 “I thought you might like a newspaper to read while you’re in prison. There’s a very fascinating article in here – it’s about me and how great I am.”