SPOILER ALERT! While I’ve tried not to give too many plot details away it’s possible some may have slipped through anyway – be warned!

I don’t have too much experience of watching fan films, be they Star Trek or otherwise. I’ve tried a handful over the years, but for some reason they never really seem to hold my interest for very long. Sadly, Star Trek Continues does nothing to make that any easier for me – not because the series is bad, but because it’s so consistently terrific in every respect that it leaves all other similar productions far far behind. Every aspect of the series is so thoroughly polished and true to the original that calling these fan films seems almost an insult; these are produced by professionals giving their time and effort for free just for the love of it, and that love comes across on screen in pretty much every frame.

Star Trek Continues first beamed online just over two years ago, introducing us to Vic Mignogna as Captain Kirk, Todd Haberkorn as Spock, Chuck Huber as Doctor McCoy, and Chris Doohan as Scotty, alongside many other Enterprise crewmembers both old and new as they embark on brand new voyages picking up where the original Star Trek TV series of the 1960s left off. These new episodes aim to be as close as possible to the look and feel of the original series in pretty much every respect; the props, the costumes, the sets, even the lighting and camera movements all feel like a vintage episode of the show. Most of the music is the original Sixties stuff too, with the occasional new composition scored in keeping with the show’s original soundtrack. The space shots, while CGI, are pretty impressive too, easily up to the standard (if not better) of the Remastered project a few years back. The fifth and latest episode of the series, Divided We Stand, received its premiere at Salt Lake Comic Con in September and is now widely available online, and is yet another triumph for a series that has already received much support and praise from Star Trek fans around the world.

When an intruder infiltrates the Enterprise computers resulting in a freak accident on the bridge, Captain Kirk and Doctor McCoy find themselves apparently thrown back in time to the American Civil War – specifically to the day before the Battle of Antietam, one of the bloodiest in American history. Finding themselves on opposing sides of the conflict can the pair avoid changing history – or even manage to survive the next 24 hours?

This episode sees Star Trek Continues reach another important milestone; this is the first time that the series has shot on location (barring a very brief scene at the end of the first episode, Pilgrim of Eternity) and the team make the most of the opportunity. With the story set amidst the backdrop of the American Civil War we have re-enactors by the busload here, lending the production a sense of size and scale that it has never had before. It’s a tremendous step forward for the series, and one that hopefully will be able to continue in the next episode. It’s also worth mentioning that the director of this episode, Vic Mignogna (this series’ Captain Kirk) does some terrific work here and throughout the story.

Location filming also allows the writers greater scope to expand their stories. Getting away from the confines of the beautifully-recreated Enterprise corridors and out into the real world (not to mention real history) provides an interesting dilemma for the two characters, more than just the usual worrying about not changing history that often accompanies Trek time travel stories. Here, Kirk is placed in the position of knowing what’s to come and with no way to prevent it of having to find a way to rationalise the conflict to himself and the people around him. The scene where he is sat at the campfire with some of the other soldiers the night before the battle, trying to remind them of what they’re fighting for and the brighter future that the battle may one day lead to when all they want is to get home to their loved ones, is one of the best in the show’s five-episode history. It’s an interesting area to explore, and while Star Trek Deep Space Nine would later tread this path and ask questions about when it was ‘right’ to fight it was rare for the original series to do so, at least so overtly. There’s no one easy or comfortable viewpoint to the situation, but it makes you think, and that’s usually a sign of quality Star Trek.

On the acting front things are similarly strong. Todd Haberkorn continues to impress me as Spock, despite my initial misgivings; nothing to do with his performance at all, just that Leonard Nimoy is so closely connected with that character that it’s always difficult to adjust to seeing a new actor take the role on. Here we see Spock struggling to be an effective acting Captain while his two closest allies among the Enterprise crew are incapacitated, and while that isn’t dwelt on much it’s there nevertheless and it’s a nice touch. 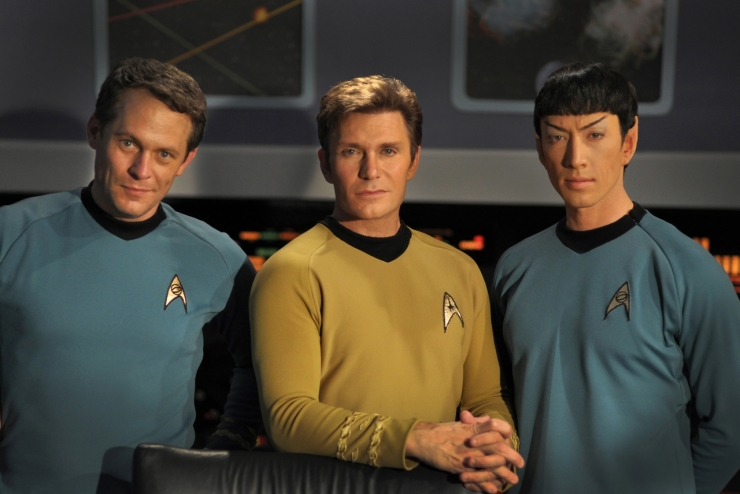 Star Trek Continues isn’t afraid of incorporating other characters from the original series outside of the main cast, or even adding entirely new characters to the mix if the story requires them. Episode 3 saw Kipleigh Brown join the crew as Yeoman Smith (and thankfully remaining onboard ever since), and here we have Martin Bradford making his debut as Doctor M’Benga, a character who made only a couple of appearances in the original show. It’s a small role but an effective one and well-played, even if the story is a little vague on how the character’s name should be pronounced! Sadly my personal favourite character in Star Trek Continues, Michele Specht’s Doctor McKennah, only gets one brief scene in this episode, but it’s a good one and shows that the production doesn’t feel the need to force characters in front of the camera if the story doesn’t really need them to be there.

Instead the focus is very much where it needs to be, on Kirk and McCoy, and there’s no getting around this; Vic Mignogna’s Captain Kirk is easily the single greatest thing about this wonderful series. Its 110% spot-on, a perfect recreation of everything William Shatner brought the character without ever once crossing the line into parody or pastiche, which I imagine is considerably harder than it looks. Its not just a matter of incorporating Shatner’s strange, halting, way he would talk, during his. Speech. TotheKlingons. His physical take on the character is pitch-perfect as well; the way Shatner moved, the way he’d sit at a desk or lean against a bridge station. At one point during the first episode he even did this odd little hand gesture and made me think Yep, that’s just how Shatner used to do it. and then I suddenly realised that I’d never consciously been aware that Shatner did that until I saw Mignogna do it. That’s how good he is. He just is Kirk, right from the get-go, and this episode (as with the previous The White Iris) allows him to display Kirk’s more vulnerable side without compromising the character’s strength. He’s put through the wringer here in more ways than one, and at every moment Mignogna is never less than utterly compelling.

Similarly this episode is a showcase for Chuck Huber’s Doctor McCoy, something that has been very much needed up to this point. While Huber played McCoy in some short scenes released before the full series began, for the first two episodes McCoy was played instead by Star Trek expert Larry Nemecek, with Huber returning to the role from episode 3 onwards. Despite both actors giving great performances the character has never really been spotlighted in any of the previous episodes – a shame, since as the years go by McCoy becomes more and more my favourite character from the original series. Now we finally get an episode that casts the spotlight on the good doctor, and in particular the character’s greatest strength; his humanity. Thrown into a situation where men are dying all around him McCoy has little choice but to knuckle down and tend to the wounded, no matter how it may possibly affect the timeline – and, in one particularly harrowing scene, his nickname of ‘Bones’ becomes just a bit more than that!

If I had to nitpick just a little bit I would maybe suggest that the story’s climax and resolution aren’t all they could be. For one thing the epilogue doesn’t really make it seem like the incident affected Kirk and McCoy all that much – odd considering how intense the series of events they experienced were. Similarly for a moment it seems as though Kirk is about to be left with a life-changing injury – and then it’s not addressed again. He apparently just gets up and walks it off – and if you’ve seen the episode you may understand why I find that difficult to get my head around!

One thing that is resolved is the plotline involving a young soldier but we don’t get to see any of it. We’re told what happened and how brave he was, but were told in such great detail that it kind of robs the moment of some of its power. It may have been a conscious decision to play that down and instead to focus more on Kirk’s reaction to the news, but in a production brimming with several very effective battle sequences it seems odd that even a handful of shots couldn’t have been spliced in just to get that moment across a bit better.

The way the threat to the Enterprise is eventually handled also didn’t quite sit right with me. Having identified the intruder as being interested in nothing more than information-gathering the Enterprise crew takes steps to isolate it and then they just destroy it. Really? With the threat now contained and easily transportable, perhaps to some science station for further study, just destroying it out of hand didn’t feel particularly Star Trek.

These however are very minor niggles, and in no way affected my enjoyment of the episode. Once again Star Trek Continues shows what can be done when a group of like-minded talented people get together and produce something brilliant purely out of love for the original source material. While Divided We Stand doesn’t quite reach the heights of my favourite episode thus far (episode 2, Lolani) one thing that all five episodes have in common is that they are great Star Trek as in the heart and soul of what made the original series so great is alive and well in these episodes. Each has the tough decisions, the explorations on humanity, the character dramas that made the best episodes of the series so compelling and frankly these five stories are far superior to much of the latter years of televised Star Trek or the recent feature films in terms of being true to the original Roddenberry concept. The heart is there, the optimism is there. Trek is there, and it looks set to continue for a very long time to come! But in the words of LeVar Burton, you don’t have to take my word for it why not give it a look for yourself?