I’ve never really been a huge comics fan; not for any specific reason, it’s just not something I’ve had much exposure to. The one and only exception to that however came in the form of the comics based on the various Gerry Anderson Supermarionation series, which captured my imagination when I first read them back in the early 1990s and still have a nostalgic appeal to this very day. In the last ten years not one but three companies have had a crack at re-releasing these comics, with varying degrees of success, and I thought it might be worth looking back at each attempt that’s been made to bring these classic strips back into print.

But first, a little history; although I grew up with the comics during the 1990s when the BBC were repeating the Supermarionation shows (as one show was repeated a comic would appear on shelves to accompany it; Thunderbirds in 1991, Stingray in 1992, Captain Scarlet in 1993, and lastly Joe 90 in 1994 before all four titles were condensed into The New Thunderbirds which finally folded in 1995) little did I know at the time that the majority of strip stories they contained had originally been produced way back in the 1960s.

TV Century 21 (later just TV21) was first published in 1965 and quickly became one of the most successful British comics of all time, achieving record sales that remain unbroken to this day. One of the reasons for this success was in no small part down to an ingenious idea that reportedly came from Gerry Anderson himself; that of presenting the comic as if it were a tabloid newspaper from one hundred years the future, with headlines and bylines relating to the strips within. That in turn gave the impression that the events being reported all took place within the same fictional universe, and slowly but surely TV21 began to embrace that notion and all of the storytelling possibilities it provided. Although the comic included many strips based on non-Anderson series it was the Stingray and Fireball XL5 strips that were the mainstays of the initial issues, with Thunderbirds and Captain Scarlet eventually joining the ranks too.

Combining all the various Anderson series into one cohesive universe was something had never really been attempted on television (and probably wouldn’t have worked even if they’d tried) but somehow in the comic it made sense. If Steve Zodiac needed help tracking down underwater criminals he could call Troy Tempest and Stingray for help, and if Captain Scarlet was trapped on a rocket heading out into space who better to recover him than a fleet of Fireball XL ships? It wasn’t something that happened every issue or even every story but it was a regular enough occurrence and it added an enormous amount of charm to the comic, even if it did lead to one or two inconsistencies especially when comparing the comics to the television series they were based on; why for instance did the Thunderbirds Are Go! feature film make such a big deal about the first manned landing on Mars when the earlier Fireball XL5 had already visited numerous planets outside our solar system?

This shared-universe style of storytelling occasionally made certain Anderson series as presented in TV21 feel somewhat different from their TV counterparts; Fireball XL5, a series which I loved on first viewing but that I can perhaps describe most charitably today as ‘naffly twee’, becomes much more compelling and exciting in comic form, at times feeling much closer in tone to the later Captain Scarlet series. Meanwhile the Thunderbirds strip would occasionally go completely off the deep end and give us stories involving giant rampaging space monsters, time machines and armies of robot penguins that cried WEEEEE-AINGGGG!!! when they exploded (because of course they exploded) – all things that could never have appeared on television and would have felt totally out of place if they had, but which certainly have to be commended for their imagination nonetheless. 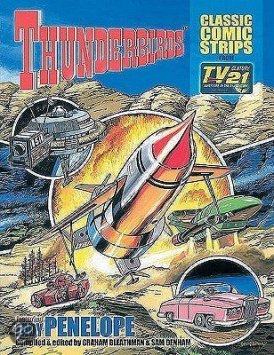 The runaway success of TV21 in the 1960s made plundering its archives for material for the 1990s comics not only logical but also cost-effective, and despite the addition of new stories for the 90s comics it’s the classic strips of the past that still hold the most appeal today. It wasn’t until 2001 that any publisher realised that this material held appeal for adults as well as children, and the first proper hardback book featuring reprints of TV21 stories was published in the form of Thunderbirds – Classic Comic Strips compiled by Graham Bleathman and Sam Denham. This 160-page collection showcased three Lady Penelope stories and four Thunderbirds stories (one of which I’ve never seen reprinted anywhere else) alongside TV21-style mock newspapers covers, cutaways and original adverts. It was a nice way to get some of this material back on shelves, but sadly no further volumes were forthcoming and it would be another eight years before anyone would try publishing anything similar.

Finally along came Reynolds and Hearn (a company well known for producing high quality TV and film-related books) with a plan to reprint collected volumes TV21 strips under the title of Century 21. Six Gerry Anderson titles would appear in these books; Thunderbirds, Stingray, Captain Scarlet and the Mysterons, Fireball XL5, Zero-X and UFO (which appeared in later comic Countdown rather than TV21). Oddly Joe 90 and The Secret Service, both of which had strips published during the same era, never made an appearance in these books, and only two Lady Penelope stories were to be included. 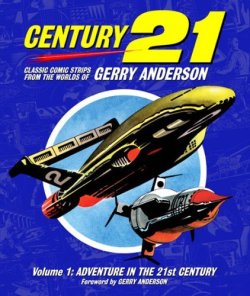 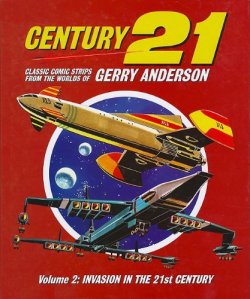 The first two volumes (Adventure in the 21st Century and Invasion in the 21st Century) were published simultaneously in 2009 in both paperback and hardcover, and the third (Escape from Aquatraz) appeared later that year. As the titles suggest each volume collected strips from across the various Anderson series according to a particular theme – so for instance Invasion in the 21st Century features, well, invasion and takeover stories. This approach usually ensured that each series would be represented equally in each book, though occasionally one would get less of a look in (the volumes dealing with space-related shenanigans were usually light on Stingray stories, for instance). Some well-written introductions from compiler Chris Bentley shed some light on the history of the comic and the people involved, and as someone who hadn’t previously been too aware of the behind-the-scenes stories of TV21 I found these to be extremely informative. 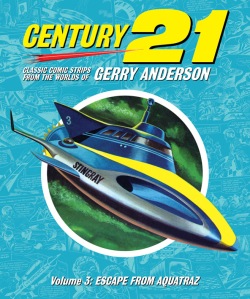 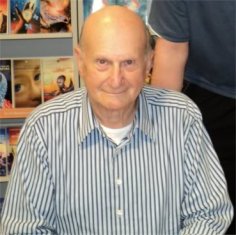 Volume 4 (Above and Beyond) was published in early 2010 and is particularly noteworthy for me because it finally gave me the chance to meet Gerry Anderson himself, when he appeared at Forbidden Planet’s London store to sign copies. If it isn’t obvious by now Anderson’s television series and films have had a huge creative influence on my life from about the age of five, so I don’t think it’s any great exaggeration to describe him as something of an inspiration or even hero and I wasn’t disappointed to finally meet him. He came across as a rather nice chap who was happy to be there and was willing to sign any other merchandise people brought along, as well as pose for photos. Unfortunately I blinked on mine. Dammit… 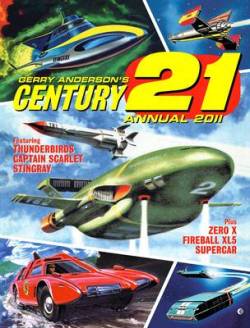 Two further Century 21 collections were announced for that year; an annual in time for Christmas (exact contents unknown, although tantalisingly the cover promised Supercar – a series that never appeared in the regular volumes – would be included) and a fifth volume of reprints entitled They Walk Among Us. Sadly Reynolds and Hearn soon got into difficulties and the company dissolved, with these two titles never seeing the light of day.

That might have been the end, but a fifth and final volume in the collection did arrive in late 2011 when Menace from Space (curiously featuring no volume number despite obviously being part of the same series) was published by Signum Books in hardback only. It isn’t clear whether this collection is the originally-planned They Walk Among Us with a new title and cover art, although the background illustration on the They Walk Among Us cover comes from a (rather awful) Thunderbirds strip that does appear in Menace from Space so it’s quite possible that that is the case.

Menace from Space continued the lavish high standard of the previous volumes, but sadly there were to be no more titles in the series. It isn’t clear exactly what happened behind-the-scenes to bring the range to a halt, especially since all involved with these books were committed to reproducing this classic material in a higher standard than ever seen before or since, but it seems to have been down to simple bad luck on the publishing front rather than poor sales.

Some particular goods and bads of this range;

Goods – wherever possible the stories were scanned directly from the original artwork rather than the comics themselves, allowing finer detail and more vivid colours as well as some lovely enlargements of individual frames and panels used in the introductions and back covers of each volume. That, plus the quality of the paper used, means that on the whole the strips look better here than in any other reprint series. It was also a wonderful treat to finally read stories that hadn’t been reprinted in the 1990s comics and that I was thus totally unfamiliar with, such as some of the later Zero-X and Captain Scarlet strips. The variety of the series was another bonus – it wasn’t just the early Thunderbirds stories being reprinted for the umpteenth time!

Bads – not much of a criticism really, but the scattershot selection of the stories included in these volumes means that after a while it becomes difficult to find your favourites! Also volume 4 seems to have been printed on thinner paper than usual, so the book feels much flimsier as a result. Just the fact that they ended is the biggest bad of all!

Despite the collapse of Reynolds and Hearn these books are still very easy to get hold of, and for very reasonable prices too. They’re an extremely well-presented look back at one of the major success stories of the golden age of British comics, so if you have even a passing interest in these series or fond memories of the comics they’re all well worth picking up!

BUY THEM ON AMAZON: